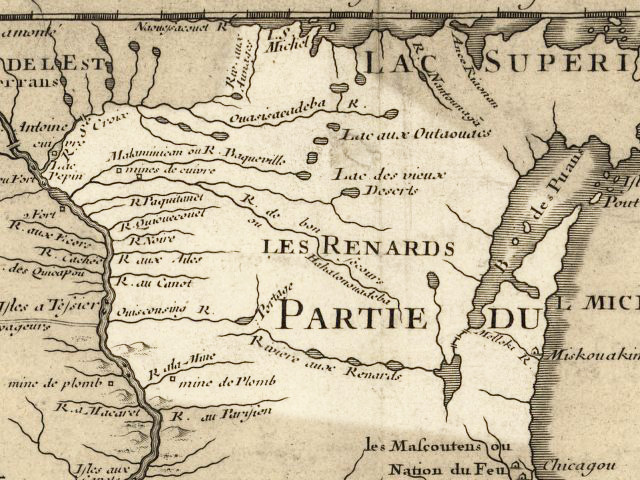 The Wisconsin region was first explored for France by Jean Nicolet, who landed near Green Bay at Red Banks in 1634. Great Britain won control of the region after the French and Indian Wars in 1763. Wisconsin became a territorial possession of the United States in 1783 after the American Revolutionary War. However, the British remained in de facto control until after the War of 1812.

Name origin: "Wisconsin" is the English spelling of a French version of a Miami Indian name for the river that runs 430 miles through the center of our state. Recent scholars have concluded that in Miami it meant, "this stream meanders through something red." Many different meanings of the word have been advanced. According to the Wisconsin Historical Society, various authors who interviewed elderly Indians, French residents or fur traders have claimed it meant, "Stream of a Thousand Isles," "Gathering of Waters," "muskrat house," "grassy place," and even "holes in the bank of a stream, in which birds nest." Visit the Wisconsin Historical Society website for more detailed information. 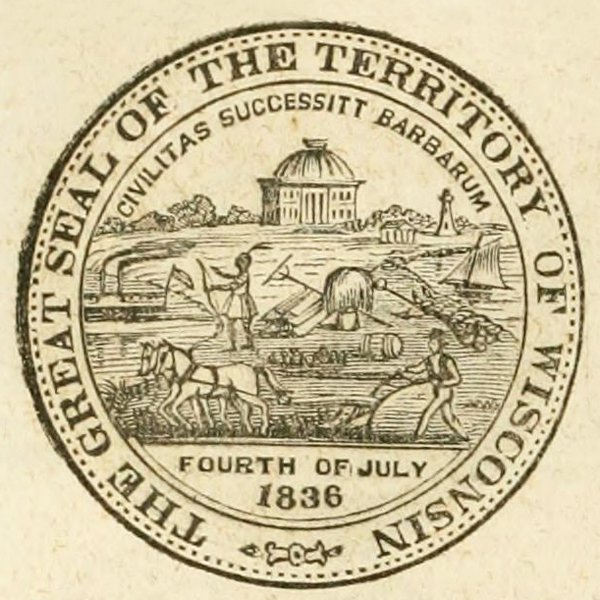 Largest city: Milwaukee (on the shores of beautiful Lake Michigan)

Other "Capital" proclamations made by cities in Wisconsin: 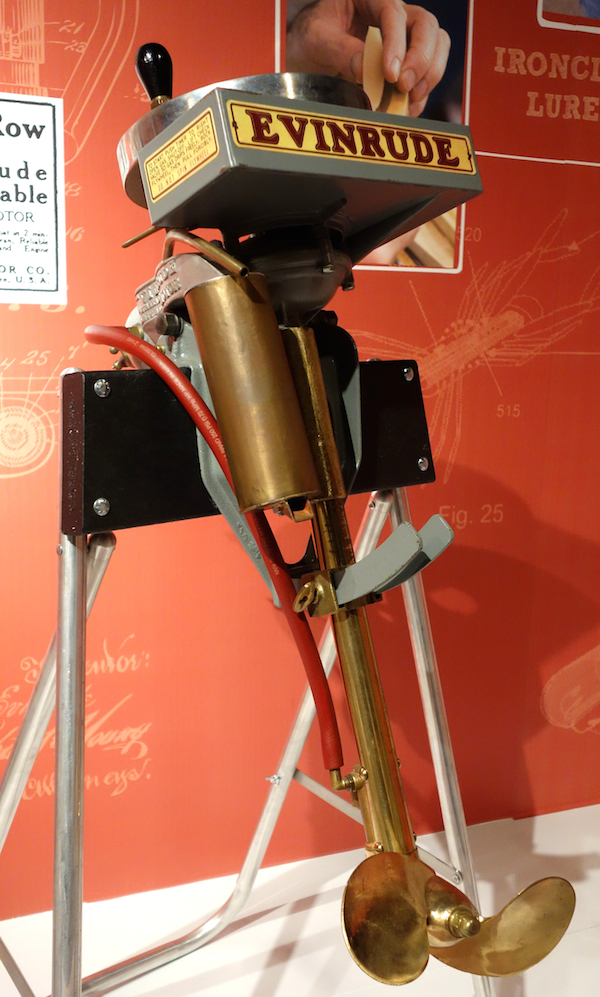 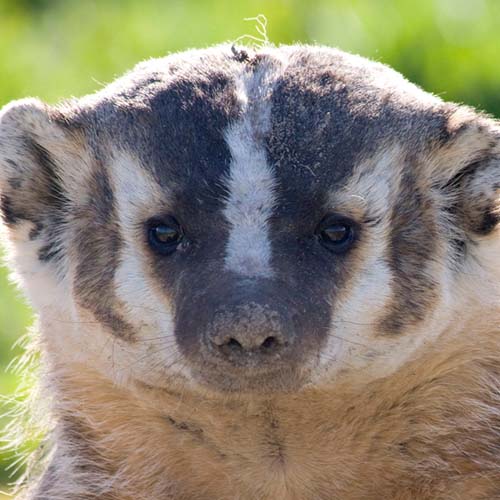 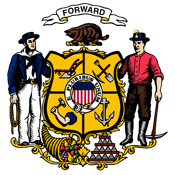 Microbe: Lactococcus lactis   (ALMOST BUT NOT QUITE OFFICIAL)

Jim Abrahams - movie director and writer (Airplane); born on May 10, 1944 in Shorewood, Wisconsin.

Alan "The Horse" Ameche - Athlete/football fullback; born Lino Dante Ameche on March 1, 1933 in Kenosha, Wisconsin. Heisman Trophy winner while at the University of Wisconsin-Madison. He was a cousin of noted actors Don Ameche and Jim Ameche. Wisconsin Athletic Hall of Fame.

Bonnie Bartlett - Actress; born on June 20, 1929 in Wisconsin Rapids, Wisconsin. She is best known for her role as Ellen Craig on the medical drama series "St. Elsewhere". She and her husband, actor William Daniels, who played her fictional husband Dr. Mark Craig, won 1986 Emmy Awards on the same night, becoming the first married couple to accomplish the feat since fellow Wisconsinites, Alfred Lunt and Lynn Fontanne, in 1965.

Rowland Bernard "Bunny" Berigan - American jazz trumpeter; born on November 2, 1908 in Hilbert, Wisconsin. His 1937 classic jazz recording "I Can't Get Started" was inducted into the Grammy Hall of Fame in 1975.

Aaron Bohrod - Painter; born on November 21, 1907 in Chicago, Bohrod accepted a position as artist in residence in 1948, succeeding John Steuart Curry, at the University of Wisconsin-Madison, and remained in that capacity until 1973.

Rachel Brosnahan - Actress; born on December 15, 1990 in Milwaukee, Wisconsin. Most known for her Emmy Winning role in the Amazon Video period comedy-drama series, The Marvelous Mrs. Maisel who she stars with fellow Wisconsinite, Tony Shalhoub.

Laurel Blair Salton Clark - Medical doctor, United States Navy Captain and NASA astronaut; born on March 10, 1961 in Ames, Iowa but considered Racine, Wisconsin to be her hometown. Clark graduated from William Horlick High School in Racine, Wisconsin and received both her bachelor of science degree and doctorate from the University of Wisconsin-Madison. Clark was a medical doctor, United States Navy Captain, NASA astronaut and Space Shuttle mission specialist who was killed in the Space Shuttle Columbia disaster. 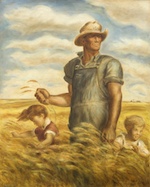 John Steuart Curry - Painter; born on November 14, 1897 in Dunavant, Kansas, Curry was appointed as the first artist in residence at the University of Wisconsin-Madison in 1936.

Harley-Davidson - Motorcycle pioneers and manufacturers: Sometimes a name is more famous than the person(s) for which it is attached. In this case, the name "Harley" combined with "Davidson" is one of the most iconic brands in America — if not the world. The men attached to the hyphenated name were all born in Milwaukee, Wisconsin.

Richard Davis - Musician, Double bass; born on April 15, 1930 in Chicago, Illinois, Davis moved to Wisconsin in 1977 and became a professor at the University of Wisconsin–Madison, teaching bass, jazz history, and improvisation.

Carl Eliason - Inventor; born in 1899 in Michigan's Upper Peninsula, he moved with his family to Sayner, Wisconsin in 1909. Invented the prototype of the modern snowmobile "motor toboggan" in his hometown of Sayner in 1924.

Ole Evinrude - Inventor; born Ole Andreassen Aaslundeie on April 19, 1877 in Vardal (now Gjøvik), in Oppland, Norway but grew up on a Lake Ripley farm near Cambridge, Wisconsin. Inventor of the outboard motor.

Lynn Fontanne - Actress; born Lillie Louise Fontanne on December 6, 1887 in Woodford, London, England. Although she never relinquished her British citizenship, she lived for many years at Ten Chimneys, in Genesee Depot, Wisconsin with her husband Alfred Lunt. Lynn Fontanne is interred next to her husband at Forest Home Cemetery in Milwaukee, Wisconsin. 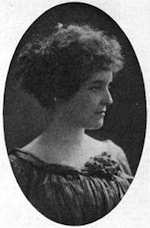 Jane Hamilton - Apple farmer, novelist; born on July 13, 1957 in Oak Park, Illinois but has lived in Rochester, Wisconsin since 1979.

Bobby Hatfield - Singer; born on August 10, 1940 in Beaver Dam, Wisconsin. Best known as one half of the Righteous Brothers.

Elroy "Crazylegs" Hirsch - American football player; born on June 17, 1923 in Wausau, Wisconsin. Nicknamed for his unusual running style, Hirsch played for legendary coach Win Brockmeyer during his time at Wausau High School. Hirsch played his first college varsity season with the University of Wisconsin Badgers in 1942 and later became the Director of Athletics for the University of Wisconsin-Madison.

Hans V. Kaltenborn - Journalist (American radio commentator) know as H.V. Kaltenborn; born on July 9, 1878 in Milwaukee, Wisconsin, and grew up in Merrill, Wisconsin. Played himself in three films, the Frank Capra film "Mr. Smith Goes to Washington" (1939), "The Babe Ruth Story" (1948), and (uncredited) in "The Day the Earth Stood Still" (1951).

Jane Kaczmarek - Actress; born on December 21, 1955 in Milwaukee, Wisconsin. Majored in theater at the University of Wisconsin-Madison. Was married to fellow Wisconsinite, Bradley Whitford for 18 years. Best known for her role as the mother, Lois, in the TV series, "Malcolm in the Middle". 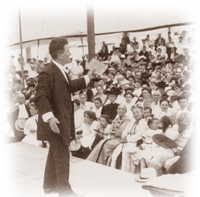 Aldo Leopold - American ecologist, forester, and environmentalist. Born on January 11, 1887 in Burlington, Iowa, Leoplod was long-time Wisconsin resident. Associated with the U.S. Forest Products Laboratory in Madison, Wisconsin and was a Professor of Game Management in the Agricultural Economics Department at the University of Wisconsin Madison. Author of A Sand County Almanac (1949).

Liberace - Pianist; born on May 16, 1919 in West Allis, Wisconsin. A child prodigy and the son of working-class immigrants, Liberace enjoyed a career spanning four decades of concerts, recordings, television, motion pictures, and endorsements.

James "Jim" Lovell, Jr. - NASA Astronaut; born in Ohio but his family moved to Milwaukee when he was young. Lovell graduated from Juneau High School and later attended the University of Wisconsin-Madison. Lovell is famous as the commander of the Apollo 13 mission.

Fred MacMurray - Actor; born on August 30, 1908 in Kankakee, Illinois. Before MacMurray was 2 years old, his native Wisconsin parents moved to Madison, Wisconsin where his father worked as a music teacher. The family then relocated within the state to Beaver Dam, where his mother had been born in 1880. 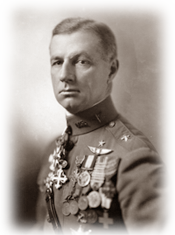 Billy Mitchel - United States Army general; born in Nice, France, Mitchell grew up on an estate in what is now the Milwaukee suburb of West Allis, Wisconsin. Mitchell served in WWI and is regarded as the father of the U.S. Air Force. His grandfather Alexander Mitchell, a Scotsman, was the wealthiest person in Wisconsin for his generation and established what became the Milwaukee Road along with the Marine Bank of Wisconsin. Mitchell Airport in Milwaukee is named for General Mitchel.

John Muir - Naturalist and preservationist; born on April 21, 1838 in Dunbar, East Lothian, Scotland, Muir's family emigrated to the United States in 1849, starting a farm near Portage, Wisconsin called Fountain Lake Farm. It has been designated a National Historic Landmark. Muir enrolled at the University of Wisconsin-Madison when he was 22 where he took his first botany lesson.

Gaylord Nelson - United States politician; born on June 4, 1916 in Clear Lake, Wisconsin. He was the 35th Governor of Wisconsin, a United States Senator and the principal founder of Earth Day.

Les Paul - Jazz and country guitarist, songwriter and inventor; born Lester William Polsfuss June 9, 1915 in Waukesha, Wisconsin. His family was of German ancestry and Paul's mother was related to the founders of Milwaukee's Valentin Blatz Brewing Company and the makers of the Stutz Bearcat automobile. Paul was a pioneer in the development of the solid-body electric guitar which "made the sound of rock and roll possible".

Christopher Latham Sholes - Printer, publisher, politician and inventor; born on February 14, 1819 in Mooresburg, Pennsylvania and moved to Milwaukee in in 1837. He was the inventor of the QWERTY keyboard and, along with Samuel W. Soule and Carlos Glidden, is credited with inventing the first practical typewriter in 1869.

Ben Sidran - Jazz and rock keyboardist, producer, label owner, and music writer; born on August 14, 1943 in Chicago, Illinois, Sidran was raised in Racine, attended the University of Wisconsin–Madison and has been living in Madison since 1971.

Viola Smith - Drummer; born on November 29, 1912 in Mount Calvary, Wisconsin. Smith was a founder of the all-female orchestra, The Coquettes, and was billed as the swing era's "World's fastest girl drummer." Lived to be almost 108 yars old.

Kathie Sullivan - American-born singer; born on May 31, 1953 in Oshkosh, Wisconsin. She appeared on television's The Lawrence Welk Show from 1976 to 1982.

Greta Conway Van Susteren - Television news anchor; born on June 11, 1954 in Appleton, Wisconsin. She graduated from Xavier High School in Appleton in 1972 and the University of Wisconsin–Madison in 1976.

Tommy Thompson - United States politician; born on November 19, 1941 in Elroy, Wisconsin. 42nd Governor of Wisconsin (having been elected to an unprecedented four terms) and served as U.S. Secretary of Health and Human Services.

Orson Welles - Actor and producer; born on May 6, 1915 in Kenosha, Wisconsin.

Bradley Whitford - Actor; born October 10, 1959 in Madison, Wisconsin. Was married to fellow Wisconsinite, Jane Kaczmarek for 18 years. Best known for his role in the TV series, The West Wing

Charles Winninger - Actor; born on May 26, 1884 in Athens, Wisconsin and grew up in Appleton, Wisconsin. Character actor known for appearing in Showboat, State Fair and Ziegfeld Girl.


The Beer Barons of Milwaukee and their Famous Names:

Frederick Pabst - Brewer; partner in the brewery founded by Phillip Best (1844) that was later renamed the Pabst Brewing Company.

Joseph Schlitz - Brewer; partner in the Krug Brewery founded by August Krug (1849) in Milwaukee, Wisconsin, and renamed it the Joseph Schlitz Brewing Company in 1858. 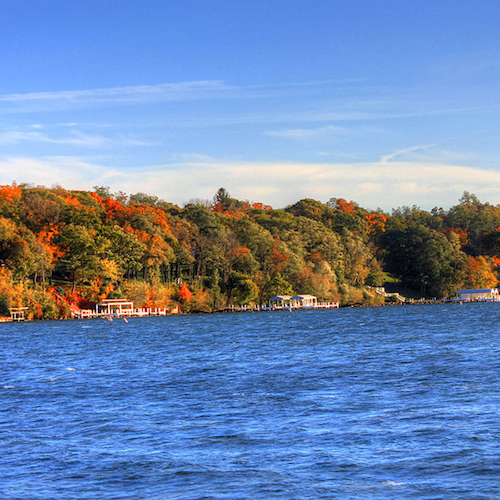 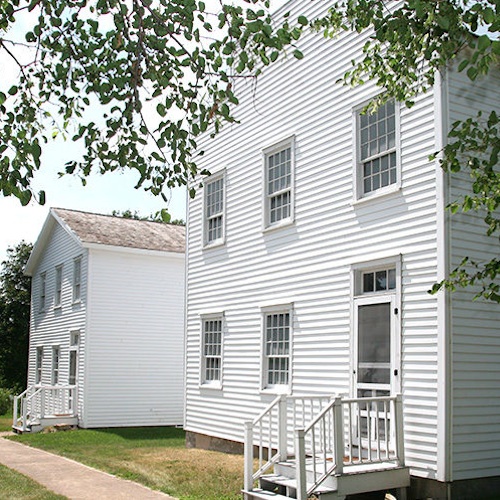 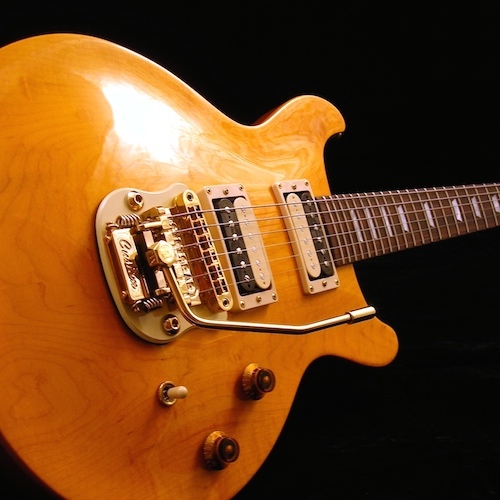 The Statue on top of the State Capitol dome is not "Forward" but is officially named "Wisconsin" and has also been nicknamed the "Golden Lady." She stands 15 feet, 5 inches high and weighs more than 3 tons. In her left hand, she holds a globe with an eagle perched on it and on her head is a helmet topped with a badger. She faces Lake Monona. Wisconsin was sculpted by Daniel Chester French, the same artist that created the seated Abraham Lincoln Statue for the Lincoln Memorial in Washington D.C.


Wisconsin has more lakes than our neighbor to the west, Minnesota, that promotes itself as the "Land of 10,000 Lakes." Wisconsin boasts over 15,000 lakes within the state and an estimated 1017 miles of shore along the Great Lakes.